Is your book for boys or girls? 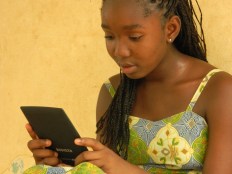 I am currently preparing two children’s books for publication and one of the questions I am often asked is “Who are they for?” My answer is that they are for children (aged 7 plus if we have to be more specific, but I’d rather let the reader decide if I’m honest). I am then pressed on this. “Yes, but are they for boys or girls?”
This question perplexed me the first time I was asked it. I had never thought in these terms (perhaps very naively as most other things for children – clothes, toys, TV shows – are marketed very clearly for one gender or the other). I wanted to say, “Let the child decide”, but of course it’s not as simple as that. One of my books stars a ten-year-old girl and the other a thirteen-year-old boy. I imagine, therefore, that the assumption will be made that one is for girls and the other for boys. But is it necessary to label books in this way?

I certainly did not think in this way about books as a child and I read books with both girls and boys as the lead characters (as well as books with giants, jungle animals and talking mice as lead characters!). I enjoyed ‘When Hitler stole pink rabbit’ (which even had a pink cover) as much as I did ‘Charlie and the chocolate factory’ – both very different books anyway even if you ignore the gender of the lead character. My reading experience was much richer for that. I believe it also helped my development of empathy and understanding of other people. 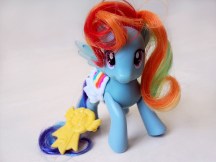 At an even younger age, I didn’t even think in terms of gender regarding toys and I owned two ‘My Little Pony’ figures as a toddler. They were given to me by my late grandmother for Christmas when I was about 18 months old. I am told I had mithered (to use the northern English dialect term which Grandma would no doubt have used) for these bright pink and purple equines and that my mother had suggested to my grandmother (who had no idea what 1980’s children might be into) that she might get them for me.
They remained a staple in my toy box until about the age of four when I gave them to a girl who lived up the road. I don’t know whether I did so because I was being made aware at primary school and by other children that these weren’t for me or whether I grew tired of them. But, it is clear that gender labels meant nothing to me at a young age.

I was pleased, therefore to be directed recently by a friend to ‘Let Books be Books’, a campaign led by the organisation ‘Let Toys be Toys’. They believe that marketing books as being for girls or boys is limiting and restrictive. They even state on their website that such “artificial boundaries turn children away from their true preferences, and provide a fertile ground for bullying”. They are currently running a petition asking publishers of children’s books to stop marketing books in this way and have already had agreement from a few big names, such as Usborne, Scholastic and Ladybird.
Yet many people would argue that it is simply a case of helping parents, carers, relatives, etc. find appropriate books for children. Some may even argue that in helping adults and children to find new books it encourages reading. While I do sympathise with that argument, I do agree with the ‘Let Books be Books’ campaign that such labels can narrow children’s horizons. This in turn could discourage children’s imaginations and restrict their learning. Instead, we should think about what books to give to children based on their interests and reading level.

So what do you think about the marketing of children’s books by gender? Is it harmful and restrictive or is it a helpful way to help adults and children find new books and encourage reading? Do let me know in the comments section below.
My first book for children, ‘Holly Watson and the furry thieves’ (which stars a girl in case you were wondering), will be available to buy from Wednesday 11th May. Sign up to my mailing list to be among the first to hear about its release.

2 thoughts on “Do we need to gender-label children’s books?”