I'm really excited to introduce you to the characters of my new book, the first in the 'Pete's Time-travelling Underpants' series. Titled 'Rule Britannia', it sees the hero, Pete Tollywash, transported back to Roman Britain by a dirty, old pair of underpants which his godmother gives him for his thirteenth birthday.  The cast are a motley crew who range from the insane to the downright despicable. Fortunately, there are exceptions, including Julius, a friendly young slaveboy with an incredible secret. Through his hilarious and exciting adventures, Pete learns that Roman Britain was not all it was cracked up to be and, in fact, could be pretty disgusting - think Horrible Histories meets Quantum Leap. So, let's meet the cast.

13-year-old schoolboy and resident of Guildford, a large town outside London. Pete is pretty lazy and, when it comes to history, completely clueless. Fortunately
(or should that be unfortunately?) for him he’s about to get a much-needed history lesson. He is convinced that his Auntie Cheryl is just being her usual insane self when she gives him underpants for his birthday. When he finds himself thrown into a disgusting, smelly prison in Roman Britain, he starts to think she may have been right about these ’time-travelling underpants’.

Though officially ‘out of her tree’, Pete’s godmother, Cheryl Snarlborough, is also a very respectable History teacher at a local secondary school. Her love of history stems from the fact that she too once time-travelled in the famous underpants. She has now passed the duty on to the next generation, but that doesn’t stop her interfering and getting Pete into lots of trouble.

Pete is hindered along the way by his loving family. His mother, Linda, hasn’t yet quite come to terms with having two teenage sons and his father, Harry, is just generally pretty baffled. The bane of Pete’s life is Jim, his older brother and the star of his school. Pete can’t quite compete with Jim academically (well it’s probably fairer to say he doesn’t even try). The only person who doesn’t cause Pete trouble is his big sister Susie, but that’s mainly because she’s away at university most of the time.

13-year-old slaveboy from East Anglia working for the same master as Pete. Julius is a bright young boy, but for some reason he takes a shine to Pete. So much so, that he lets Pete in on his secret. This propels both of them into an adventure that will put their friendship to the test and bring them up against the evil Noxius Maximus. 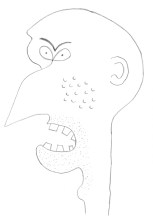 The chief slave. Snottius looks down on all the other slaves. He claims this is because he is a Gaul (sadly not the good kind, like Asterix) and they are Britons. In actual fact, it’s because he’s a rather unpleasant little toad. Suffice to say, he is not impressed when his master, Probus, comes home from the slave market with Pete in tow.

The local prefect, that is to say the head of the local government in East Anglia, Noxius lives up to his name. His favourite pastime is torturing the local Britons in his prison. Noxius is a thoroughly nasty piece of work who sells our hero into slavery. But can Pete and Julius stop his evil plans? 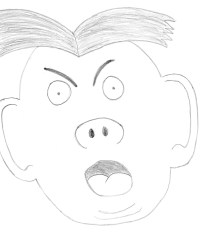 Superbus by name, Superbus by nature (‘superbus’, among other things, means ‘arrogant’ in Latin). The son of Pete's master, Probus,  he is lovingly called ‘snot-for-brains’ by Julius and Pete quickly learns why. What Superbus lacks in intelligence, he more than makes up for in downright unpleasantness. Even so, he does provide plenty of amusement for Pete and Julius who find it just too hard not to play practical jokes on him.
You will be able to meet these characters and more in 'Pete's Time-travelling Underpants' - available on Amazon from 22nd June.