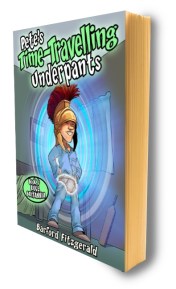 Last week I released the first in my new series of children’s books entitled ‘Pete’s Time-travelling Underpants’. The first book, “Rule Britannia”, is set in Roman Britain in the first century AD. It’s a humorous story (you may have guessed so from the title) aimed at getting children interested in history and learning historical facts in an engaging way. I stopped the other day and asked myself why I wrote it and here is what I responded.

Anyone who knows me knows that saying ‘I love history’ is a ginormous understatement. I adore the stuff and have done ever since my visits to castles around the North West of England and North Wales in my plastic knights’ armour as a small child. Writing ‘Pete’s Time-travelling Underpants’ was therefore an indulgence of sorts. It allowed me to go back and explore one of my favourite periods of history - the Roman period. It was a great deal of fun as a result.

I never really stopped being a teacher

Many years ago I was a teacher and my favourite part of the job was sharing knowledge and seeing that moment when I really piqued a child’s interest. I still regularly go on to friends and family about interesting facts, theories and other things I find interesting with the hope that it stimulates their interest too (with mixed results). So, it seemed natural to me to write a children’s book that entertained while passing on lots of interesting and often gross facts about living in Roman Britain.

I was a fan of ‘Horrible Histories’ as a child

Many of you will be aware of the highly-successful children’s non-fiction series ‘Horrible Histories’, which has even become a television programme. I loved these books as a kid for two main reasons:
These books made distant peoples seem more human than other history books that focussed on the grandeur of Ancient Rome or the industrial might of the Victorians. In short, they made you realise that the people in these times were essentially the same as us, which made them all the more interesting. I hope with ‘Pete’s Time-Travelling Underpants’ to create a similar understanding in young readers.

It gave me a chance to try out humorous writing

My first book, “Holly Watson and the furry thieves”, was a children’s detective mystery story. Although I included some humour in it, this was not the over-riding tone of the book. I’d always enjoyed trying to write more humorous stuff in my spare time (though rarely sharing it) and also reading humorous children’s books. It seemed natural to try out something humorous and ‘Pete’s Time-travelling Underpants’ was the result.
From the response to the book so far, I realise it’s not only a good book for kids - adults are really enjoying it too. You can check it out now on Amazon in paperback and ebook.