Fresh from his recent adventure in Tudor England, our very own time-travelling scholar, Pete Tollywash, returns to tell us some of the fascinating and important things that happened in this week in history. I now hand over to our guide.

Thanks Barford! Some really important stuff happened this week in history and a lot of it involved some very important women. Auntie Cheryl tells me you don’t see much about women in history. She says that’s for two main reasons - women weren’t normally allowed to get involved in political stuff and that men wrote the history. Anyway, it sounds like this was a very important week for women, as we’ll see.

November 28th, 1893, New Zealand is the first country to allow women to vote

You know that boring voting stuff grown-ups do? I’ve realised it might actually be a big thing. Apparently lots of people have protested and even been killed just so people could be allowed to vote. Women weren’t allowed to vote in Britain until 1918 and even then they had to be really ancient (like 30 years old!). New Zealand (apparently it’s some islands near Australia) was way ahead of Britain and the rest of the world on this and on this day in 1893, all women in the country were allowed to vote. At the same time, a woman was elected mayor of Onehunga (yeah, I dunno how you say that one either) in Auckland - the first woman mayor anywhere in the British Empire. Go Kiwis! Britain eventually caught up and on this same day in 1919, someone called Nancy Astor became the first female member of parliament. 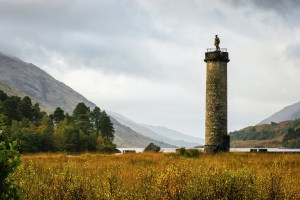 A monument to Bonnie Prince Charlie in Scotland - looks nice.

This one really surprised me! Auntie Cheryl was telling me that the Scottish and English haven’t always been the best of pals and in fact were at war in 1745. There was this guy called Charles Stuart, who apparently said his dad, James, was King of Great Britain because Charles's granddad, also James, had been king (are you still with me?). But Charles's granddad had been kicked out and replaced by Charles’s Aunt Mary and Uncle William. Quite a lot of people in Scotland wanted Charles’s dad to be king and egged Charles on to invade Britain. The French also liked the idea and said they’d help. Charles, or ‘Bonnie’ Prince Charlie as they nicknamed him, came to Scotland to begin the invasion. He had hoped that a French army would help him, but their ships got caught in storms. Even so, with the hep of local Scottish soldiers he managed to get control of Edinburgh and then marched into England. He took over a place called Carlisle and even got as far as Manchester, but apparently his mates told him the English had got a really big army and were coming to do him in. So, his mates decided to return to Scotland, even though Charlie didn’t want to. The English followed and in April 1746, his Scottish army was smashed at the Battle of Culloden. Charlie escaped and got back to France, but never returned to Scotland again.

December 1st 1955, Rosa Parks refuses to move to the back of the bus

We’re now about to meet one of the other important women of this week in history. This one sounds a bit like nothing, doesn’t it? In fact, surely the back of the bus is the best place to be? Away from the teachers, right? I’ve found out, though, that the back of the bus isn’t always a good place to be. In fact, in some parts of the United States of America, even in the 1960s, it was a really bad place to be. That’s because in some of the states of the US, they used to make black people sit in the back part of public buses while only white people could sit in the front. On this day in 1955, a lady called Rosa Parks was asked to give up her seat so a white person could sit down. She refused and was arrested. But it didn’t end there. She had inspired so many others that they launched a boycott of public buses in Montgomery and elected a man called Martin Luther King, Jr. to lead the boycott. This was the start of something called the Civil Rights Movement, which, over many years, led to improvements in the position of black people in America.

Apparently also on this day in 1988, Benazir Bhutto became the first female prime minister of a Muslim country. What a day for women! 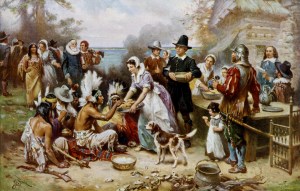 My mate Kev got punched by an angry lady trying to grab an Xbox off him in Asda on Black Friday last year. Auntie Cheryl said it’s probably the fault of some people who went to America in 1619. These people left England because they thought they’d have a better life in the ’New World’ (that’s what they called America). Sounds like it might not have turned out like that as some other people already lived there and weren’t that keen on sharing their land with the new guys. But anyway, these guys from England promised that when they landed in the New World, they would give thanks to God AND celebrate the anniversary of the day they landed every year after that. So this is how that Thanksgiving thing in America started. Dunno if these guys invented Black Friday as the day after Thanksgiving, probably not, but there wouldn’t be a Black Friday and Kev wouldn’t have got punched if these guys hadn’t invented Thanksgiving. So, you see, it’s their fault.

Hope you enjoyed this week’s history picks. Thanks for reading. See you again in a fortnight!