Writing about determined and independently-minded girls in my first book has given me a greater appreciation of female role models. I am amazed at how many fantastic female role-models (living and dead) there are and even more amazed at how little we talk about them. Every fortnight, I will be trying to do my best to improve the situation by sharing with you the life and works of great women from the past who deserve to be much better known. My first ‘legendary lady’ is Ada Lovelace, a Victorian pioneer of computing. 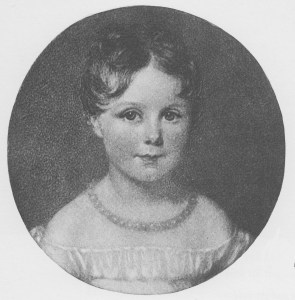 A bit more about Ada Lovelace

We all know Lord Byron. Most of our modern lives now depend on computers. Yet few of us know the poet’s only legitimate daughter and the world’s first computer programmer, Ada Lovelace. Poor Ada's life would make a cracking period drama. The daughter of an unhinged A-list celebrity absentee father, starved of a bitter mother's attention, crippled by illness as a child and dogged by scandal throughout her life, Ada still made significant, though little recognised, contributions to the scientific world and then died young.

Ada never knew her father, who left England four months after her birth, having been granted a ‘Deed of Separation’ by his wife. It is said that Byron was bitterly disappointed that Ada was not the “glorious boy” for which he had hoped. As it turned out, though, Ada went on to excel far beyond most boys in the exclusively male world of mathematics. Her mother, Anne, encouraged her to study mathematics and scientific subjects as a way to avoid Ada falling into the ‘insanity’ of her father. Anne also tried to teach young Ada ’self-control’ by making her stay in her bedroom alone. Perhaps it was this enforced solitude that ignited Ada's creative spark and her dreams of flight. At the age of twelve she wrote a book on the subject called ‘Flyology’, which she illustrated with a plan for a steam-driven flying horse. Her research into the potential for flight and plans to build herself a pair of wings were cut short at the age of fourteen when she was temporarily paralysed following a bout of measles. It was during her slow recovery that she became absorbed in mathematics.

In her late-teens her tutor, the now celebrated Scottish scientist Mary Somerville (another exceptional woman of the time), introduced Ada to Charles Babbage, nowadays known as the ‘father of computers’. He had built a prototype for a mechanical calculator called the ‘Difference Engine’. Ada was intrigued by the ‘Engine’ and over the years she became a zealous advocate and follower of Babbage’s work. Later, when Babbage began work on a more advanced machine, an early computer called the ‘Analytical Engine’, Ada became completely fascinated and visited Babbage regularly. She also undertook much of her own research around the subject and received instruction from Babbage. When a young engineer and future Italian Prime Minister, Luigi Menabrea, wrote about the ‘Analytical Engine’ for the Italian scientific community, Ada undertook to translate it to help popularise Babbage’s ideas in England. 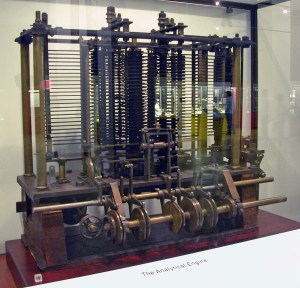 Ada’s translation was not the most important part of this work. It is her own notes which she then added to the translation of the treatise from which her renown in computing circles stems. Amongst the notes she included an example of mathematical instructions, or an algorithm, which the ‘Analytical Engine’, once completed, could use to calculate complex numbers called ‘Bernoulli numbers’. The ‘Analytical Engine’ was never completed and so Ada’s algorithm could not be put to the test. However, her algorithm is now recognised as the first ever computer programme. She also proposed in the notes that such a machine could, in future, even be used to create art and music. This suggestion was scorned by many at the time, including her friend Babbage. The import of Ada’s visionary words was not realised for another hundred years when fellow computing pioneer Alan Turing saw them and quoted them in his seminal paper, ”Computing Machinery and Intelligence”. 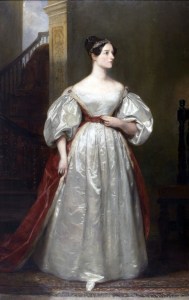 Sadly, as was often the case for independently-minded women of education in the nineteenth-century, Ada’s life was mostly an unhappy one. Her mother’s bitterness against her father coloured their relationship and she continued to treat Ada poorly throughout her short life. Ada married a fellow aristocrat, William, the 8th Baron King and later Earl of Lovelace, and had three children. However, her friendships with other men, mostly fellow mathematicians and science enthusiasts, were a regular source of scandal. This was made worse by her fame as the daughter of Lord Byron, who had known much scandal himself while alive. In fact, rumours continued to abound about his odd and shocking behaviour even after his death. Ada also got herself into substantial debts from gambling, something women simply didn’t do in those days. She had joined a syndicate and built a mathematical model to help with placing large bets, but the model had eventually failed her. Her relationship with her husband was strained as a result and he is said to have abandoned her deathbed when she told him some secret that remains a mystery to this day. Ada died of cancer, still in debt and deprived by her mother of contact with friends. She was the same age as her famous father had been at his death - thirty-six.

Though very sad, Ada’s story has still found its way into children’s literature in the form of Christopher Riddell's ‘Goth Girl’ series. The heroine, Ada Goth, and her friend, William Cabbage, are modelled on Lovelace and Babbage.