As the hero of my children’s time-travelling adventure series finds out, the Romans had a very different approach to eating compared to us modern types. Here are five of their strangest eating habits.

Did your mum ever tell you off for slouching at the dinner table or using your fingers? Well, she’d have hated dinner at a wealthy Roman house. Everyone lay on couches to eat and were quite happy to share a couch if guests turned up. They would lay one their sides propped up on one elbow while using their free hand to feed themselves.

If you didn’t have a lot of money (which meant the vast majority of people back then), your diet would be not much better than that of animals. Many Romans main food was millet, which was also fed to farm animals. This would often be boiled into a kind of porridge. If you were lucky it might be flavoured with a vegetable or two.

The Romans used to flavour a lot of their cooking with a kind of fish sauce called ‘garum’. They loved it so much, they would even put it in sweet dishes, including fruit tarts.

Ruins of a garum factory in Southern Spain - bet it smelt lovely!

You may be forgiven for thinking our American cousins invented breakfast pancakes. Wealthy Romans would often eat a wheat pancake filled with dates and honey for breakfast (I might try that myself).

5. How do you want your dormice done?

One of the top culinary delights of ancient Rome was honey-coated dormice. The tiny rodents were a popular snack in many wealthy households and would often be kept alive in little dormouse warrens called a ‘glirarium’ to provide a fresh supply. The warm confined space would encourage the dormice to hibernate and fatten up! 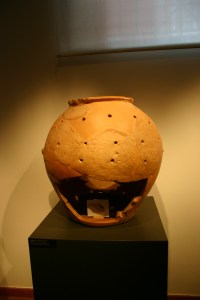 A 'glirarium' at the Archaeological Museum of Chiusi - poor dormouse!

If you want to find out more about life in Roman times, be sure to sign up for my mailing list to get your free 'Pete's Time-travelling Underpants' ebook.