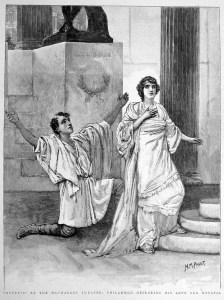 A 19th century imagining of Hypatia

What? A female philosopher in Roman times?

As we hear so little about women in the classical world, it is assumed they always filled a subordinate role to men. This was not always the case and it was most certainly not the case for Hypatia. She was born in Alexandria, in the Roman province of Egypt, in around 350AD. She was taught philosophy, mathematics and astronomy, probably by her mathematician father Theon.

What was so great about her?

The fact she learnt these three disciplines was remarkable enough, but she was later sent away to the home of philosophy itself, Athens, to continue her education. Once she returned home, she became a teacher of philosophy, astronomy and mathematics herself. She was so well respected that in about 400AD she became the leader of the Neoplatonist school of Alexandria (these were the ‘modern’ followers of Plato’s school of thought).

As a well-known and highly educated woman in the classical world, Hypatia also faced a lot of prejudice and controversy. And this was to prove her undoing. In the year 415AD, a feud arose between the prefect of Alexandria, Orestes, and the its bishop, Cyril. The origin of the feud is unclear, but Hypatia somehow became involved. As a friend of Orestes and a highly intellectual woman, it is said that Hypatia was accused of witchcraft by some of the Christian followers of Cyril. When a riot broke out among followers of Cyril, their anger was turned on Hypatia and she was murdered by the mob. This is seen as a critical turning point in classical scholarship and the fortunes of Alexandria as it led to many scholars leaving the city. The city was still recovering from damaging attacks on its library in around 390AD. This new blow led to the decline of what had been one of the most, if not the most important seat of learning in the Roman Empire.

Want to find out more about Roman times? Sign up to my mailing list and you'll get a free ebook from my historical comedy series, 'Pete's Time-travelling Underpants'.