It's that time again when I hand my blog over to Guildford's foremost historical scholar (and only time-travelling schoolboy), Pete Tollywash, to take you through some key events that happened this week in history...

Thanks, Barford. Almost the end of February, so that means it’s time for me to pick out some more historical highlights from this week in history. The British and the French appear not to have been that friendly this week and Queen Elizabeth the First got herself into a bit of bother with the Pope (no surprise there, then). There were also two big book milestones this week as well. All in all, another busy week in history. 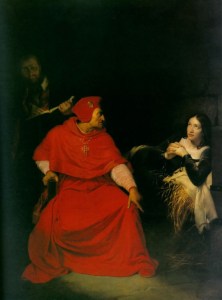 I’ve mentioned this before, but England had an empire long before ‘The British Empire’, and it was a lot closer to home. The first ‘English Empire’ was in France and, unsurprisingly, the French weren’t too keen on it. You might have heard of this Joan of Arc person before, well apparently she was particularly unimpressed with the English Empire. She claimed to have had divine visions telling her to rise up and free France from the English. She told the King of France this and (after a while) he believed her and gave her troops to fight the English. Did I mention she was 17 years old? I reckon the King of France was clutching at straws a bit there. Anyway, she did all right for a bit against the English and won a few battles, but after two years she was captured. The English then accused her of heresy because she claimed God had told her to free France from the English. On this day her interrogation began. It didn’t go to well for Joan and she was eventually burned at the stake for heresy and witchcraft three months later, aged 19.

The Last Invasion of Britain by the French, begins near Fishguard, Wales

As I said earlier, the British and the French weren’t the best of pals this week in history. This one ends a bit more comically than the previous one (no teenage girls getting burned at the stake). France planned to attack Britain in support of the ‘Society of United Irishmen’, a group who wanted an independent Ireland. They hoped to land a small army in South-West Wales and march on Bristol. They didn’t get very far, though. A hastily assembled group of local volunteers joined the soldiers stationed at Fishguard to stop the French. It is said the French were confused by the presence of women in traditional Welsh outfits (red coats and black hats), which they mistook for British redcoat soldiers. Believing Fishguard to be better defended than it was, discipline broke down among the French. There is a story that a local woman, Jemima Nichols, finding twelve French soldiers in her field, marched the men at ‘pitchfork-point’ to the local church and locked them inside. When reinforcements arrived, the French were in no fit state to fight and surrendered. 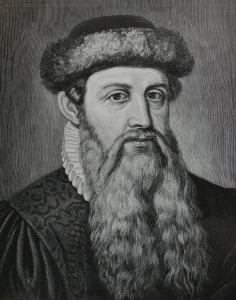 Until his guy came along, copies of books in Europe had to be written out by hand. I just wouldn’t have bothered - I’d have just played Dragon Dancer on my Xbox instead (they didn’t have Xboxes then, Pete - Barford). It took Johannes Gutenberg many years of research and experimentation to create the first printing press in Europe. The first thing he printed was a poem (what a waste of time!) in 1450. By 1455 he had created a printing press that could print a whole Bible (that’s a pretty long book). The few copies that survive are thought to be the most valuable books in the world.

Following my recent trip to Tudor times (see here for more info), I’ve found out this sort of thing happened a lot. It was Liz’s dad, Henry, or King Fatso as I like to call him, who had started the trouble with the Pope by telling him he wasn’t in charge of the Church of England anymore because Henry was going to be. The Pope called Elizabeth a ‘servant of crime’ and accused her of heresy (they liked doing that back then). He then concluded by saying that Elizabeth’s subjects didn’t need to listen to her. This just made things worse for the poor Catholics living in England… 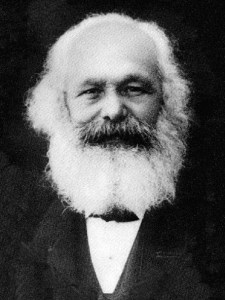 I don’t really know what communism is, but apparently it was a very big deal in the twentieth-century, with people having revolutions to make their country communist and other countries fighting wars because they were afraid their country would become communist. It was a big geeky German guy with a huge beard called Karl and his wealthy factory-owning mate called Friedrich who started it all on this day 159 years ago...

I hope you enjoyed our little trip through this week in history. If you want to learn even more about the past, then sign up to Barford's mailing list. The generous old guy is giving away a free ebook all about one of my adventures in Roman Britain just for signing up!

See you next time.