Hi everyone! Pete Tollywash, the best time-travelling schoolboy in Guildford, here with another selection of top events from this week in history. 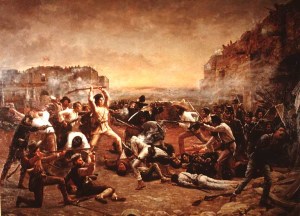 My dad’s got this song called ‘Remember the Alamo’ sung by this old guy named Johnny Cash. Apparently this Alamo thing is a big deal to a lot of Americans, in particular Texans. Auntie Cheryl tells me that Texas was part of Mexico in those days, but a lot of the locals, including settlers from the US, were unhappy with the Mexican government and launched a rebellion, the Texas Revolution, in October 1835. The Mexicans weren’t too impressed with this - well you wouldn’t be if you were them. They were further annoyed by being defeated by the Texans in December 1835 at the siege of Béxar (I can see why). The Texans then took up position at an old Mexican fort - The Alamo - and prepared for a further Mexican attack. The Mexicans arrived on 23rd February 1836 and besieged the Texans who held out for 13 days. The 2,000-odd Mexicans finally defeated the 200-odd Texans with an assault on this day in 1836. The defeat encouraged the Texans to keep fighting (weirdos) and they defeated the Mexicans at the Battle of San Jacinto in April. They then declared the Republic of Texas.

Henry VIII’s divorce request is denied by the Pope

As you may be aware, I met this Henry the Eighth bloke on my most recent time-travelling adventure - proper fatso. I met his second wife, Anne Boleyn, too. Henry had had quite a lot of trouble getting a divorce from his first wife, Catherine of Aragon, so that he could marry Anne. The Pope wasn’t having any of it and apparently that was a big problem in those days. But Henry, being Henry, decided if the Pope wasn’t going to give him what he wanted, he wouldn’t listen to him (I wish that would work with Mum). So, Henry told the Pope to get lost and said that from now on he, and not the Pope, would be supreme head of England's church. 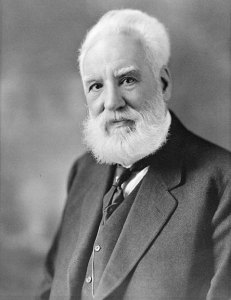 Alexander Graham Bell - what is with these guys from history and beards?

Is this Alexander Graham Bell guy the reason old people say ‘I’ll give you a bell’ when they mean they’ll call you? Why would you bother calling anyone anyway when you can message them through your Xbox? But apparently in 1876 they hadn’t got round to inventing the Xbox yet, so they had to make do with inventing the telephone. It took Bell years to perfect his telephone and when he finally got it to work, what did he do on this day in history? He rang this Thomas Watson guy, who was a couple of rooms away to say, "Mr. Watson, come here. I want to see you.” Thank goodness we’re all using our phones for more useful stuff now.

Witiges, king of the Ostrogoths, ends his siege of Rome, leaving the city in the hands of the victorious Roman general, Belisarius

These Ostrogoth guys again. I first came across these guys when Auntie Cheryl told me about them when I was researching for a previous week’s article. Apparently they were pretty scary guys from what’s now Germany and nothing like the goth kids who hang around the newsagent up the road at night. This Witiges guy (not a particularly scary name) was King of Italy when this Belisarius invaded. He was sent by the Byzantine Emperor in Constantinople (now Istanbul) who claimed he was the Roman Emperor and rightful ruler of Italy (confused?). Belisarius soon took Rome, so Witiges came down to the old Roman capital from Ravenna, the new Ostrogothic capital of Italy. His siege didn’t last long and on this day, Witiges retreated to Ravenna. This day marks the annexation of Italy by the Byzantine Empire or the recreation of the Roman Empire (if you believe what the Byzantine Emperor, Justinian, says).

So there you have it. I hope you enjoyed this week’s edition. If you want to find out more about my own historical adventures, Barford’s offering a free ebook (what a generous guy). Just sign up to his email list and he’ll send it over to you.