With Easter round the corner, loads of fantastic visitor sites across the country are starting to re-open, including many Tudor gems. Why not get out there with the kids and have some fun while (shock, horror) learning a bit of history too? If you read my latest book, you’ll know I’m a bit of a history geek and am a fan, in particular, of the Tudors. So, here are some of my favourite Tudor sites in England to inspire your Easter holiday trip ideas. 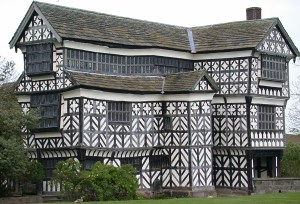 I loved this place as a kid because it’s so higgledy-piggledy looking. Little Moreton Hall is a quintessentially Tudor building, with its wonky walls and black-and-white timbers on the outside. As with a lot of these old buildings, the fun for kids lies in spotting the little details as you walk around. You’ll find wolves and dragons carved into the wood and little messages left by the people who built the house, marking their work. It also has a fully restored Tudor-style garden where you can wander while the kids let off steam running around.

Ludlow was a medieval castle defending the English border with Wales which then became an important royal residence in Tudor times. It was here that one of the most important events in British history took place, though few at the time would have guessed how important. Here, Prince Arthur, the older brother of King Henry the Eighth, fell ill while on honeymoon and died. Had this not happened, it is likely that the reformation of the English Church would not have happened. As it was, Henry, Duke of York then, became heir to the throne and married Arthur’s widow, Catherine of Aragon. Though now a ruin, the castle is still in good condition and gives you a good idea of what it would have been like in those days. It is also a fantastic place to run around pretending you are a knight (if the fancy takes you). The market town of Ludlow is itself a lovely place with a number of Tudor buildings to be seen, including the Feathers Hotel. 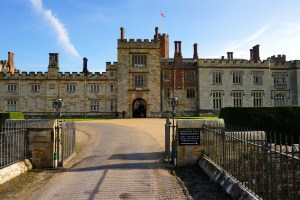 One of the most famous stately homes in England and used in the TV series Wolf Hall and the film ’The Other Boleyn Girl', Penshurst Place is a must-see. The very grand ‘Baron’s Hall’ inspired the great hall in my most recent book ‘Tudor Trouble’. What’s really fun for kids here is all the armour that lines the ‘Baron’s Hall and the ‘Nether Gallery’. The large grounds are a perfect place to burn off energy before going in the house and the Toy Museum a perfect carrot to encourage less enthusiastic day trippers.

It’s not just about stately homes. In Portsmouth you can see the remains of one of Henry the Eighth’s own ships which sank during an attempted invasion by the French. The Mary Rose is fascinating as it has frozen the Tudor world in time for us. You can see the hull of the boat itself and also loads of the ship’s cargo which gives a unique insight into life almost 500 years ago. You can even see Tudor musical instruments and medical implements.

The ‘top dog’ of Tudor mansions, Hampton Court was home to Henry the Eighth after he confiscated it from his former adviser Cardinal Wolsey. The Palace sprawls with various wings added over the centuries, but at its heart it remains a Tudor palace. You can even see the ‘real’ tennis court in which Henry the Eighth played. ‘Real’ tennis looks like serious fun - I’ll have to give it a go one day. During the Easter holidays this year, they’ll be running a number of Tudor-themed ‘plays’ (Tudor Encounters) where actors will re-enact events from the palace’s past. They often re-enact jousting tournaments too - a favourite pastime of Henry the Eighth and his court.

The Tower of London 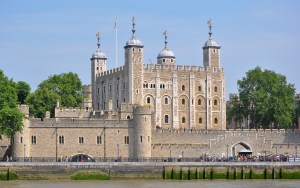 The Tower of London from the River Thames

The Tower of London is not simply Tudor and is always worth a visit for the amazing breadth of history it covers. That said, its Tudor links are very strong, from the royal residential buildings, completed under Henry the Eighth to the many grisly things that went on here. You can see the site on Tower Green where Henry had his second wife, Anne Boleyn, executed. You can also visit the White Tower, where, at the same time as Anne was being executed, many of those seen as opponents to Henry's religious reforms were held and tortured. The armoury is also full of Tudor items including Henry the Eighth’s own armour. The Tower of London is a very full day out - you probably won’t see it all.

Richmond Park is the old deer park of Elizabeth the First’s favourite residence, Richmond Palace. It is also where she died. As you potter around Elizabeth’s extensive grounds you may bump into the descendants of some of her deer. For great views back over London, head to King Henry’s Mound, so called because it was reputed to be the site where Henry stood to see a rocket fired from the Tower to signal that Anne had been executed. While the story is now seen to be pretty doubtful, the spot is definitely a great place to survey the city, ancient and modern (including as far as St. Paul’s Cathedral). You can still see the old gatehouse of Elizabeth’s palace on Richmond Green.

If you want to find out more about me and my books and get your free ebook, just click here.