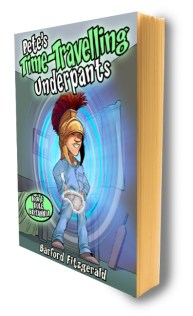 day present you’ve ever received? How about a dirty pair of underpants?

When Pete Tollywash's godmother gives him a pair of old y-fronts for his thirteenth birthday and claims they're magic, he assumes she's mad. But when the underpants whisk him back to Roman Britain in the year 71 AD, he realises she wasn't kidding.

Arrested as a spy and sold into slavery by the evil 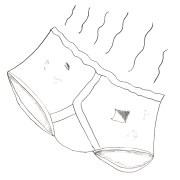 Noxius Maximus, Pete meets Julius, a young slave-boy with an incredible family secret. But can Pete help Julius escape from slavery and prove his family secret? And will they foil Noxius Maximus's evil schemes?

Do you fancy taking on a bloodthirsty King Henry the Eighth?

Neither does thirteen-year-old time-traveller Pete Tollywash. But then again, he doesn't have much choice if he's going to save his friends’ dad from the executioner's axe.

Pete's wonderful y-fronts transport him back to the year 1535 where he is just in time for a big party. Things seem to be getting even better when King Henry the Eighth gate-crashes the party. But the fun comes to a grinding halt when the host, Lord Fortescue, is accused of plotting to kill the king. Armed only with his marvellous underpants and helped by Lord Fortescue's son and daughter, Pete sets out to save the unfortunate lord. But can Pete save Lord Fortescue from the executioner? Will his time-travelling secret be revealed? And will he ever get the hang of Tudor English? Find out in this raucous ride where Pete gets a hands-on, and often dangerous, education in Tudor history.